My Event Bucket music networking event – a great way to get yourself out there!

Last week, promotional firm My Event Bucket held this year’s second ‘Strictly Go Networking’ evening, a music industry specific speed-networking gathering. The event was exclusively for those with a connection to music, and attracted everyone from producers to artists to guitar tutors.

The event kicked off with a 30 minute speed-dating-style ice-breaker, where people from different parts of the industry were encouraged to mingle, brainstorm and exchange business cards. On the whole this seemed to be a decent way of encouraging networking, and most of the people I spoke to really engaged with the activity. If you want to discover new acts, or be discovered, then attending  these events could get you the contacts you need. 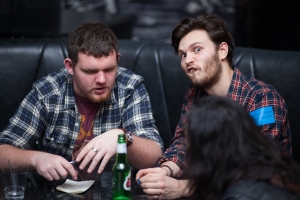 Tony Michealides was the special guest speaker for the evening. If you haven’t heard of Michealides it is well worth doing a little research, as he is one of the most interesting guys in music.

The short version of his story takes him from selling records from the back of a van, to promoting for U2 and Bob Marley. He helped to bring acts like the Stone Roses and New Order into the public eye via a Key 103 radio program and has written candidly about the inner workings of record producers, and the music industry as a whole.

Tony spoke about the early days of U2 and their path to global stardom. He related their early successes back to young bands in the modern era and to the problems and opportunities facing artists in the internet age. During the Q and A, he acknowledged that there are a completely different set of challenges within music industry today, but gave some advice in the form of his personal maxim for artists; ‘Create, collaborate, produce’.

Looking around, I pegged the majority of attendees for their late twenties and there was clearly a lot of hopeful young talent in the room. London’s young artists do have an uphill struggle in this era of MP3 downloads, rising touring prices and homogeneous radio stations and any chance to get out there and self-promote has to be a good thing.

My Event Bucket’s ‘Strictly Go Networking’ gives artists a chance to meet their peers, assess the competition, and generally give each other a leg-up. The firm will be running three similar events next month: fashion, art, and music – details of which can be found on their website.

Words and photography by Joe Hitchmough