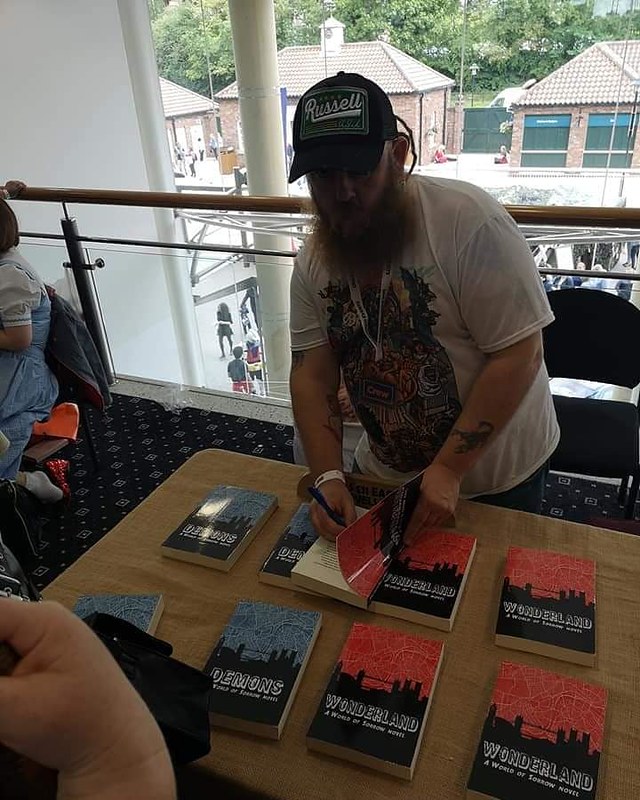 When you think of horror authors, most people think of Stephen King, Bram Stoker or Mary Shelley. Fans of scary books are missing out on another.

Kelvin V.A Allison, author of a staggering 31 novels written over 11 years. I caught up with him between writing chapters of his newest offering…

Alt: When did you first realise you wanted to be a writer?

Kelvin: It wasn’t so much a conscious decision; I have just always written. As a kid I used to make little comics and I was always writing stories, none of them ever finished, except for a character I created as a kid of about 10 called ‘Ethel Bloodworthy’ who was a witch and had adventures with a lamp post she had inadvertently made able to move. My teacher used to get me to read them to the class. I have often thought of rewriting them.

Alt: How long does it take you to write a book?

Kelvin: It genuinely depends upon my state of mind and what’s going on around me in the real world. My quickest ever novel was ‘Highgate’ in three weeks and it’s about 340 pages long. I was in a good place mentally and it just flowed from me.

Alt: What is your work schedule like when you’re writing?

Kelvin: I try and write every day, which is often hard having three kids aged between 22 and 15 months old, and my usual goal is to write at least a chapter a day. Naturally, there are some days where I miss the target, but I do my best to keep it flowing.

Alt: What would you say is your interesting writing quirk?

Kelvin: All my characters in all 31 of my novels are based upon someone that I have met, be it in passing or a friend. I have one friend in particular who has appeared in about 27 of my novels as different characters all beginning with the letter J, to match his name.

Alt: Where do you get your information or ideas for your books?

Kelvin: Random snatches of tv, the odd news article that pops up on FB (I don’t read newspapers or watch tv), or dreams. Once I have the basis of an idea then I research the topic and get as much information as I can to make it sound relatively believable. Or I hope I do.

Alt: When did you write your first book and how old were you?

Kelvin: I have written for as long as I can remember and as mentioned above, I rarely finished anything, mainly due to getting a new idea and then starting to work on that. This problem was solved by my lovely partner who refused to let me change stories. So, in December 2008 I finished my first full novel entitled ‘Skin Shifters’, and I was 35 years of age. The book took me three months to write, most of which was done sat in the middle of random abandoned hospitals where I was working as a security guard.

Alt: What do you like to do when you’re not writing?

Kelvin: To be honest when I am not writing I am awkward, miserable and cranky. I always have some form of writing implement with me in case ideas strike and the only times I cannot write is on my birthday and on Christmas day when my partner strictly forbids me on pain of death from writing. I can neither confirm nor deny I have been sat in the bathroom writing on cardboard toilet rolls with a biro.

Alt: What does your family think of your writing?

Kelvin: I have no real idea, I would like to think they are proud. My eldest daughter reads my novels but my partner is often too busy with work and our kids to have any time to do so, and my son, our middle child isn’t a huge reader. My mother doesn’t read either. However, I do have tons of friends that enjoy my novels and I have readers on every continent so that makes up for it I guess.

Alt: What was one of the most surprising things you learned in creating your books?

Kelvin: That its therapy for me. I had an extremely troubled and painful childhood and writing gets the darkness out and onto the paper. The people who wronged me have died painful deaths many times over and it is strangely therapeutic.

Alt: How many books have you written? Which is your favourite?

Kelvin: Thirty- one novels, five novellas and one rpg system. Of them all, I would have to say that I prefer ‘Thorns’ the most. I am a huge fan of botanical horror movies and books and a lot of my work follows a similar theme such as Thorns, Shuft, Bad Seed, Ubasute and Ubasute; Witch Rock, not to mention my short ‘Organic Love’. I grew up in an era of Triffids and the entire concept is mesmerising to me.

Alt: Do you have any advice to anyone who wants to become a writer?

Kelvin: Yeah sure, if you feel the need to write then write. Don’t let anyone tell you that you can’t. You don’t need to have lots of degrees or certificates in writing. If it’s in you to do it then do it. All I would say is don’t write for money. Write for you. Be selfish. If others love your work too that’s a bonus.

But never force your art. As a late American friend of mine once told me, writing is like passing wind. It should happen naturally. If you have to force it then there’s a chance it will be shit.

Alt: Do you hear from your readers much? What kinds of things do they say?

Alt: What do you think makes a good story?

Alt: As a child, what did you want to do when you grew up?

Kelvin: I wanted to be a priest, with a burning desire that I now struggle to put into words. It didn’t happen. That’s all I want to say about that.

Alt: Do you use real people as inspiration for your characters?

Kelvin: Horror would be Richard Laymon and fantasy would be the legend that was David Gemmell. If you bent my arm and forced me to choose one, I would have to go with David. Both died within a year of each other and I haven’t found an author to replace them since.

You can purchase Kelvin’s novels at www.Lulu.com

Also check out his Facebook page at www.facebook.com/beardoflegend for info on material past, current and upcoming.